On Saturday, April 4th, 1pm, at the Playwrights’ Center, join Carey Perloff and the Center’s Jeremy Cohen for a discussion about Perloff’s new memoir Beautiful Chaos: A Life in the Theater. Perloff is in town for the opening of The Guthrie’s “Mr Burns: a post-electric play,” co-produced by her American Conservatory Theater. 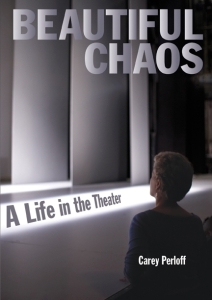 In Beautiful Chaos, Carey Perloff, award-winning playwright, director, and Artistic Director San Francisco’s American Conservatory Theater (A.C.T.), pens a vibrant and revealing memoir of her twenty-plus years at the helm. She takes on critical questions about leadership and creative inspiration, as well as gender parity in the arts, and delivers an impassioned manifesto for the role of live theater in today’s world.
Perloff shares behind-the-scenes stories about her collaborations with Tom Stoppard, Harold Pinter, Olympia Dukakis and Bill Irwin, among others, as well as many A.C. T. productions including Philip Kan Gotanda’s After the War, Armistead Maupin’s Tales of the City, The Tosca Project, and The Black Rider (with Tom Waits and Robert Wilson).

Deb holds an M.A. in Arts and Cultural Management from Saint Mary’s University, and a B.A. from the University of Minnesota where she majored in theater. Based out of Minneapolis, Minnesota, Deb has 12 years of experience working in the nonprofit arts sector, working with Twin Cities cultural gems such as The Cedar Cultural Center, the Midtown Global Market, In the Heart of the Beast Puppetry and Mask Theatre, and more. She’s primarily drawn towards work that involves relationship building, such as communications and fundraising. Deb also has two decades of experience as an events manager for live music, theater, and dance. Her work as a stage manager has brought her into intimate collaborations with diverse communities, artists from around the globe, and projects ranging from river boat ballets to burlesque holiday shows.

View all of Deborah Ervin's posts.